If a recreational player is thinking about competitive soccer, there are two options prior to seasonal (Fall) registration:
​

ARTICLE LINK: Tips for Tryouts - Parents, Do Your Research by US
​Youth Soccer 2014 Boys Competitive Coach of the Year, Mark Ryan 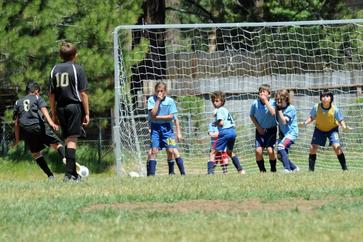 SF Local Competitive (SF Competitive Upper House & SFYS Varsity), CCSL Coast and US Club NorCal & NPL leagues for teams of advanced players to compete locally and around San Francisco. Players that are in Competitive soccer have chosen to make the commitment to practices, games, tournaments and most teams play at least 3 seasons.

before committing your player to the rigors of competitive soccer:

Q. When is the right time to go Comp?

A.  Moving to a Competitive soccer team is a per-player consideration and can happen at many different ages.  Because Rec has such a broad spectrum of skill level, for some, recreational play is appropriate for the duration of their soccer playing years. Recreational play also makes sense for multi-sport and one-season per sport athletes, since even if the player is very good, the top bracket Rec teams are often very, very good.

For others, the desire to focus on soccer, to build on individual skills and advance to the next level, to play year-round and to attend tournaments, rather than being daunting feels like the logical next step in their development. This can happen at any age - there is no rush! (USWNT striker Alex Morgan didn't start playing soccer until she was 14!) - but anecdotally in the City, where so many kids start playing as toddlers and by 4th or 5th grade have been playing for 5 years or more - the biggest shift of players from Rec to Comp tends to happen between the ages of 10-12.​

READY TO TRY OUT?

What you should know:

Every club runs and organizes their tryouts differently. Attending multiple tryouts will give you a sense of how the club organizes itself and how they train and evaluate players. Attending multiple tryouts (or prospective team practices) is also a good way to meet club directors and coaches face to face, get a sense of their style of play and the fit of the team with your player's needs.

There is a city-wide deadline for signing, agreed to by all clubs.

What does this mean for players? If you're offered a spot for a team you are psyched to be on, take it. Not so sure? The gamble is whether there will be a spot open on a particular team. In San Francisco, if a player wants to play competitively, there will be room on a comp team somewhere - it just may not be the team you were hoping for. But making the commitment binds you for a full soccer year (August - July) ... so it's worth it to make sure the situation is right for your player.

Another way to get a feel for a team or club culture outside of tryouts is to ask to attend a practice. Most teams welcome players attending a practice because it gives them an opportunity to also evaluate the player in comparison to the players already on a team. This is also a way to see a Coach's training philosophy and if your child would fit well with the way the Coaches runs their practices.