Are considering creating a team at your school?

Many teams in our recreational league come from schools across the city.

Many will request their school or close by playgrounds for practice times, minimizing the issue for getting to practice on time! You will also know the kids in the school who want to play Soccer.

Even if there is another team in the school in the same grade, you can add a team.

There is a fantastic community of volunteers ready to support you! Reach out via our new SFYS Community Portal: School Teams

Many players would love to play socially with their school or neighborhood friends and also competitively, with a more advanced team. This is not allowed in San Francisco. There are simply not enough resources to facilitate, nor will our league insurance cover a player registered on more than one team. So be clear with your prospective players about your team strength and style of play.

PLAYERS MAY REGISTER ON ONLY ONE TEAM

Be thoughtful in your team formation.

When looking for a player, consider these factors at a minimum :

We do counsel these general principles:

Remember, the most important thing for a player’s development is to simply continue playing. This means they should be enjoying themselves, and they should feel a genuine desire to continue on the following season – not just an obligation to do so. The best way to foster this intrinsic love of the game is to put the team and the players in situations where they are challenged but not overwhelmed. ​

At SFYS we are committed to maximizing the playing experience for our recreational players. Examples of our modified Playing Rules include:

More Relaxed Time Commitment
Recreational teams get 1 game and 1 practice a week during the seasons. Also, there is no yearlong commitment to play. A number of recreational teams only play the fall season and then switch to a different sport to play in the spring, while competitive teams must play at least 3 seasons and participate in tournaments.

Adapted Brackets
Prior to a season, we do our best to schedule your team against equivalent – this is why we require all teams to fill out a Rec Team Census, to get an estimate of each team's strength level. Midway through the season, the League evaluates the scores and game reports to and tweak the bracketing to improve the competitiveness of the remaining games.

Every year, coaches overestimate their team, unintentionally, or sometimes underestimate their team, intentionally – hoping to boost their team’s confidence by getting scheduled against weaker opponents. This is not fair to the opponent and not good for the kids. SF Youth Soccer believes all kids should learn how to lose as well as win. Losses give players, and teams, a chance to learn valuable lessons: it stimulates them to work harder in practice to get better; they learn to fight back, during a game, playing from behind; they learn it’s not the end of the world to lose. ​ 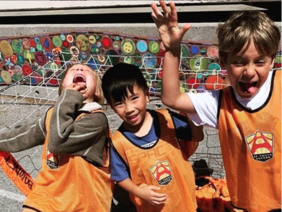