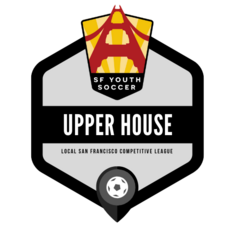 SF Competitive Upper House is a local competitive league of San Francisco teams, ages 9 to 15. SFYS Upper House is made up primarily of Gold, Silver and Bronze strength select teams. For the vast majority of teams, the competition is strong enough to provide a good challenge. Many teams prefer not to drive long distances for games every week, and prefer tournament play for additional competition. Importantly, the Upper House leagues do not require you to join a club.