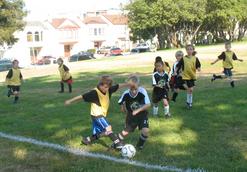 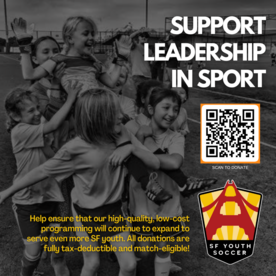 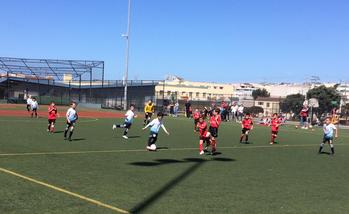 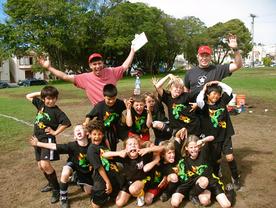 During a game, a coach should have extremely-limited interaction with the referee, if at all. Unlike other American sports, in soccer the referee has no obligation to explain a call to a coach, principally because it’s a running clock and would waste time. If you have a concern, discuss it with the referee in a very polite manner at half-time. Never argue the direction of a throw-in, it’s not worth it and won’t affect the game as it might in American football or basketball. At the younger ages referees may choose not to whistle an incorrect throw-in or a goalie touching the ball with her hands outside the penalty area, in order to keep the game going.

The right time to talk to a referee is before the game starts, when you check in – have a friendly chat, confirm the length of the halves and the substitution breaks. But during the actual game, the only reasons to interact with the referee are: 1) if a player is injured and on the ground, and the referee has not spotted this; 2) if an unsafe situation needs immediate attention.

Unlike in other American sports, soccer coaches cannot call time-out, draw up plays, or shout orders. Coaches should strive to keep communication with players to a minimum, do so only when it’s truly necessary, and each season should find themselves saying less on the sidelines. The right time to teach strategy is at practice, before the game, and at halftime.

SF Youth Soccer hosts basic and advanced coaching certifications that teach game strategy. While they are time-consuming, you will learn a lot and network with other coaches. SFYS does not present drills or games for practice ideas, simply because there are so many resources available online. Search for “soccer drills for children” and you will find an infinite number of quality videos. In addition, we encourage coaches to get to know each other, welcome each other to watch their practices, and share successful ideas. Consider recruiting an assistant to help, from local high schools or colleges or perhaps a fellow parent. Also see our Team Resources page.

We do counsel these general principles: 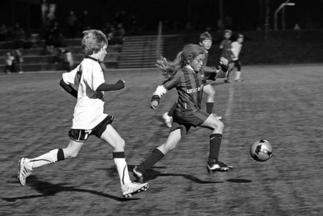 Having relationships with other coaches and other teams helps make the years in SFYS more fun. Often, the first chance to meet each other is the day you spend getting your Coach License. At games, it starts with a smile and a friendly attitude towards the other team; a little sideline chit-chat can lead to a follow-up email, mixed practices, or practice games off-season. Later, you may seek advice from each other, share tips, and potentially discuss helping each others’ players as the teams progress through the age brackets. You may see the same faces coaching through the years in your division, get to know them.

The very first season, coaches are happy to simply complete registration successfully and enjoy the games. Within two years, the roster (and number of players on the field) starts to grow, until they are playing 11 vs. 11 at the U12 age. Around the same time, some children choose to join a CCSL Prep team or try out for a Select team. This means there is some ebb and flow of players between teams, and coaches need to find new players.

When elementary school ends is usually a big transition point. There are half as many U12 teams in the SF Youth Soccer as U11 teams, because school-based teams sometimes disband as the players depart for a variety of middle-schools, and some players decide they don’t really want to play soccer. Teams that have been carried along by a single star player often don’t survive when that player leaves for a more competitive team. Sometimes coaches recruit new players, or they offer their squad to other teams, or they merge with another team to continue.

Be patient. Children develop at different rates. Many children who showed only moderate interest or ability level in their first years do indeed become wonderful, serious soccer players as they mature. If you are creating a school-based team, you have to accept that a very wide variety of talent will be on your team. If you want a more competitive team, search for players from a wider pool than just your school. State your team’s philosophy and intentions to parents, so that they can see if your intentions match theirs.

Please keep in mind that all teams, even the most competitive serious teams, still have a range of talent. For every soccer team in the world, there are leaders and role players. Successful team play means finding the right roles for each player. At the youth level, give the children some time to develop, and then find a place on the field where they can contribute. Adopt a tactical strategy that gets the most out of the entire team. Some children might be able to kick the ball far, but don’t run much; others can run hard but can’t dribble; some are good with their hands and not their feet. Each of these types of children can play an important role on a team. You may find that they enjoy it more and play better if they are not switching positions a lot, and are allowed to master the demands of just one or two positions. Meanwhile, your stronger players can be put in central roles and/or moved into a variety of positions.

Most teams begin their first U9 season teaching at least two defenders to stay back on defense, to prevent easy counter-attacks. Teams that just let all the kids swarm the ball quickly find they need to implement at least this simple tactic. If you are a Microsoccer team at the U8 level playing 4 vs 4, consider teaching this strategy now, asking one player to hang back as a sweeper. Beyond that it’s a matter of what the children can grasp. Consider using triangle or diamond positioning, where the offense is a triangle or diamond, and the defense is also a triangle or diamond. Teach situation-specific strategies for goal kicks, throw-ins, and corner-kicks.

The SF Youth Soccer website provides such tools for Rec teams. However, if you are coming from Microsoccer and your team is not even formed yet, the best way may be to telephone or email other coaches you met in prior seasons. Ask around at your school, place of worship or community center. ​

It is usually not a question of whether to split by gender, but when to split by gender. In SF Youth Soccer, co-ed teams play in the Boys divisions. There is no co-ed division. At the U8 and U9 level there are many mixed teams playing, but SFYS makes no effort to ensure they will play other mixed gender teams. By U10, most teams have made the gender split. Every year, some teams stay mixed too long and then complain about the physicality of play. A few teams do stay co-ed all the way to the U14 age group, if they have only one or two girls. The easiest way to make a split is to find another mixed team and merge into two teams, one for the boys and one for the girls.

The biggest advantage of a team that is not school-based is that it broadens children’s social experience.

The challenge of a team that is not school-based is that carpooling to practices is more difficult to organize. Since not all schools let out at the same time, some players might have trouble being at practice on time.

Many youth soccer teams start as school-based teams. This gives parents and kids a better chance to know each other and deepen relationships. It contributes informally to the overall school experience. Coming to the games is fun for parents, and carpooling to games and practices is easier.

However, school-based teams usually do encounter some stresses.

SF Youth Soccer considers the Team Manager to be the Primary Contact and depends upon the Team Managers for all communications and team follow-up. It is always good to have a non-Head Coach designated Team Manager as a team’s principal contact, largely because being a coach is emotionally consuming, and sharing the workload helps prevent coach burnout. In addition, teams that have a hired coach might want a parent familiar with SFYS to improve communication among parents and in case of coach turnover. 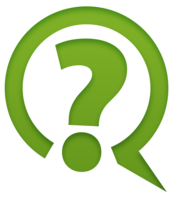 FINDING A TEAM FOR PLAYERS

Primary responsibility for finding a team rests with the player and his or her family. SF Youth Soccer does not place players or coaches on teams. Teams are formed independently, through schools or neighborhoods, by soccer clubs., etc.

Are you a player looking for a team? We have an amazing soccer community here in SF, with teams of all types and levels. Don't stress too much, as many teams need and welcome additional and new players. Do pay attention to the Registration Timeline to avoid late registration fees.​

YOUTH SOCCER IN SAN FRANCISCO is a bit different than other cities.​

​SF Youth Soccer is the largest youth participation program in the city, apart from the SF Unified School District. More than 500 teams (about 8000 kids) play soccer with or with the support of SFYS. Because the City has determined that San Francisco parks resources should go to youth first (for which we are incredibly grateful), organizations like ours which serve San Francisco youth are required to submit our field requirements 6 months in advance of the season. This means that: 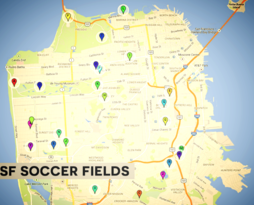 WHERE WE PLAY : SF FIELDS